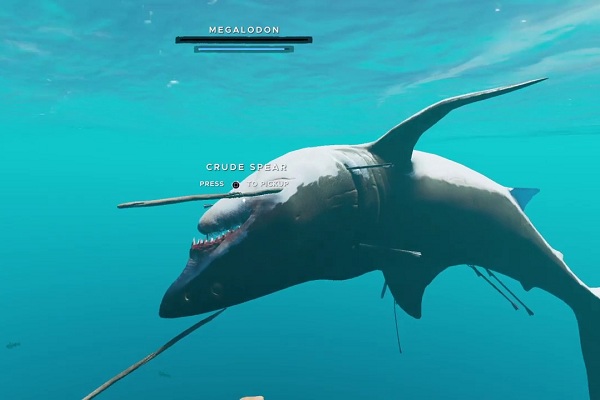 What is Megalodon In Stranded Deep?

Megalodon is one of the three bosses found as a part of the mission “Megalodon”. The giant creature has similar quantity of health as the Moray Eel, but has different capabilities and a much lethal violence. It is widely considered not too difficult to kill, but when under prepared, it can easily be deadly.

We strongly recommend every gamer to carry 2 stacks of Bandages as the Bleeding effect will come into play once you get started. It used to give a Gyrocopter Part, but in the later updates it was changed to an Aircraft Part. Unlike sharks it takes about two Speargun arrows to kill it.

On a ride or war against it, if you hide on your raft the Megalodon will attempt to smash you off the raft, but if the attempt fails it will jump off the ocean with an attempt to bit the player while still in the air. So, if you are inside the ocean, try to swim in different direction while trying to get rid of it.

We expect you to kill the giant Boss with your arrow, it could be two or more depending on how you can get that done. Meanwhile, understand that one bite is comparable to a little over 1 cube of damage vested on you.

Isn’t it laughable when i find people ask where is the megalodon in stranded deep? Well, it may seem starnge but if you still need to know then this is it. There is no stranded deep megalodon map at the moment to specifically tell you where this giant boss moves around or stays spefically.

However, Megalodon is regularly found in the ocean. So while traversing the deap ocean, chances are, you could fine this giant creature. So what do you do? For me, i go about with my devices, mostly a speargun which is like one of the deadliest wearpon in the game.

How to find bosses in stranded deep shouldn’t be a problem as long as you are willing to stand and defend yourself to the end. A quick stroll around the ocean with you raft, moves around the Island too can have you finding some of the most deadly creatures you are looking for.

How To Fight and Kill Megalodon

From what we know, megalodon fight is the easiest of them all amongst the bosses. Though we advise you not to get carried away by this as you may be dealt with by the giant. The megalodon has lots of damge stoked with him and may drag you deep down the sea should it has the advantage to do so.

Weapons and Tricks to Fight Megalodon

We would love to sea you using some of the most efficient weapons. What i personally use is the Speargun which is quite massive and durable. Now for the trick, do not get close to the Megalodon as it seems powerful in close distances. That is why we’d ask you to go with the speargun – it is almost the most efficient device in this fight. Ammo is another weapon which does lots of damage as crude spears but stacks up to 24 in the inventory which can equally bring advantages. We mensioned axes – it could help when when your spears are out of arrow and Ammo out of its inventory.

How to Make a Campfire Stranded Deep PS4, Xbox One and PC

How to Make Clay in Stranded Deep

How to Make Refined knife in Stranded Deep

Several weapons like axe to help you go a-top in the fight are equally reccommended. Meanwhile, you should have a tank of water closeby as the fight may go a bit longer than expected. Players should have several bandages, this will help n cases of Megalodon bit which is almost a norm.

The megalodon tries all it can drag the player into the deep water but it left for you to resist every attempt of such with some smart moves. If you run out of arrows or ammo, then the mission should end there except axe is available – then you may have to dive inside the water to finish your mission which is quite risky.