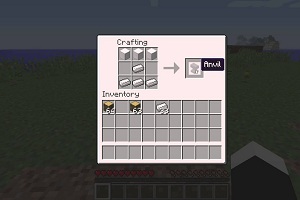 How To Make an Anvil in Minecraft? Well, if you are a Minecraft player with a fresh world, anvils can be expensive. It is necessary for players that want to upgrade armor, tools, and weapons to have the best enchantments. An anvil that is falling can actually harm any player that it hits. This means that they are used as projectiles in the Minecraft game. In the course of this article, we would be learning how to Make an Anvil in Minecraft. Anvils in Minecraft can cause up to 20 hearts of damage should they fall from a height of 40 blocks.

What are the Materials that are needed to make an Anvil

In a bid to make an anvil, the player would need the following items:

How do You Make an Anvil in Minecraft

Here are some practical steps on how a player can make an anvil in the Minecraft game.

One of the most important materials that are needed for making an anvil in Minecraft is the crafting table. You can make a crafting table by converting logs of wood into wooden planks.

For you to make wooden planks, just put the logs of wood into a slot in the survival inventory crafting table.

When the log of wood has been converted into a plank, you can go further and produce a crafting table for making the anvil.

With a crafting table, you can also make the simplest type of pickaxe for putting together your pieces of cobblestone which would be used for the anvil production.

The use of the cobblestone here is to make a furnace. To make a pickaxe, which is an important tool for making the anvil, you need to first start with the sticks for the handle. Then use the crafting table to make the sticks for the handle of the pickaxe. After that, place two blocks of wooden planks on top of each other on the right or left side of the square on the crafting table.

For your pickaxe, place a row of wooden planks alongside the top of the crafting table interface and put in two sticks under the middle of the plank. With this step, you have produced your pickaxe for use in the Minecraft video game. one of the most important uses of a pickaxe is to use it to collect a cobblestone (a block that is used to make a furnace).

The next step in anvil production is to find some coal and iron. In a bid to make some anvil, the player would need to collect a tangible amount of iron. It is important to note that iron can be found in large amounts in caves and ravines. This means that collecting them would not be difficult. You can do the work of collecting the iron with a stone or iron-made pickaxe.

In the Minecraft game, the two materials that are frequently spawned are iron and coal. A player can easily find them on Cliffside, caves, and ravines. The moment that you have found coal you then proceed to mine it. It is actually the best source of fuel to use in the game for smelting the tangible amount of iron that you would collect. Other forms of fuel in the Minecraft game can also be employed in use. The moment that you have a tangible amount of coal for smelting, then, you can go and start looking for some iron.

The moment you get at least 31 pieces of iron, you can proceed to start smelting them. In a bid to smelt them, make use of a furnace and smelt the iron down into ingots. A blast furnace can also be employed for this procedure. With a blast furnace, the iron that is collected in Minecraft can be smelted faster.

Step-by-Step Guide on How to make Anvil in Minecraft

Step 1: Open the furnace or blast furnace in the Graphic User Interface.

Step 2: Put the iron that you want to smelt into the top spot.

Step 3: Then, place the fuel of your choosing into the bottom slot.

Step 4: Next up, you would have to wait for the progress bar to fill up.

Step 5: When you have all the 31 iron smelted into iron ingots, then you would follow the next steps to make an anvil.

As the recipe of the anvil needs 3 iron blocks, you need to first fill the crafting table completely with iron ingots three times in order to make 3 iron blocks.

With your iron blocks in place, all you need to do is to place them on the top row of the crafting table. Then proceed to fill the center spot of the second row with an iron ingot and lastly fill the entire last row with iron ingots. So, here is how to use an Anvil after successfully crafting it.

How to find an Anvil in Creative Mode?

A player can find an anvil in the decoration block section of the creative menu.