The Minecraft enchanting table is nothing new, as it has been around since 2001. The alphabets of the enchanting language hail from the classic commander keen PC game.  If you have any interest in understanding the language, then make this article a must-read.

There are some advantages that are connected to understanding what the language says and how a player can enchant an item by reading the galactic alphabet in the enchantment table.

Truth is, for most players who are newbies and think that there is some reason and rhyme connected to the enchantments, well here is a shocker: there is non!

The enchantment language is just a bunch of randomized phrases and words that have no meaning whatsoever in correlation to the enchantments. You don’t need the meaning of the enchantments to make it efficacious. Because trying to know the meanings would result in some hilarious descriptions. 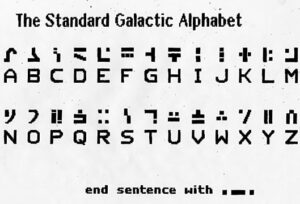 Guide on How to Read a Minecraft Enchanting Table Language

The Standard Galactic text that you see in the table above, as stated earlier does not have any meaning. They are just words and phrases that are randomized and have no correlation to the enchantment process.

The language is also used outside of the Minecraft game for codes and secret messages. But with lots of online code translators, Minecraft players can find the meaning of some of those phrases with ease. A player can also choose to look at a particular translation for every English alphabet. You would notice that trying to translate each of those symbols individually can be very tedious. And to take steps to learn the language can cost the player a lot of time.

The moment a player has access to the translation table, they would be able to individually look at each alphabet and what symbol they stand for. This is just like any other type of secret code or language used in video games or real-world scenarios.

What is the Language that is on the Minecraft Enchantment Table?

As stated earlier, the language that is on the enchantment table in Minecraft was sourced from another video game. It is an in-game writing system that is known as the Galactic alphabet. It was developed by a tech group known as “id software.”

The Standard Galactic Alphabets that you see in enchantment tables in Minecraft were created to appear in games and represent alien languages that can be found in the galaxy.  Since it has been adopted in the Minecraft video game, it is now known as the Minecraft Enchantment table Language.

Words that a Player can use for Enchantment in Minecraft

There are at least 60 different words that appear on the Minecraft enchantment table. Here is a list of them.

This shows that if a player is attempting t decipher the words that are on the enchantment table, it is going to be a combo of words, which all of them would not be English.

What do the Words on the Enchantment table that are not English mean?

There are lots of English words in the Minecraft enchantment language and a few of them that are not. Truth is, most of them that don’t make sense as English words were taken from H.P Lovecraft’s Cthulhu novels. They were drafted from the phrases that the Cthulhu worshippers chant.

This is an interesting enchantment that can be used to feather fall in the game. A player can incur a lot of feather damage and worry less about falling from a steep cliff into a certain death.