We bring you all the Scooby-Doo Characters you would like to know. Stred by the legendary Matthew Lillard, here is our list of all the Scooby-Doo Cast.
Legendary voice actor Frank Welker—the original voice of Fred—has been playing Scooby-Doo for years now and does so here, as well. Will Forte (Shaggy), Gina Rodriguez (Velma), Amanda Seyfried (Daphne), and an ideally chosen Zac Efron (Fred) lead the star-studded cast of voice actors who increasingly struggle to make this material interesting.

Here are all the 10 Scooby-Doo Characters;

Dick Dastardly was a well-known antagonist throughout multiple series within the Hanna-Barbera animated universe. The character first appeared in Wacky Races before starring in the spinoff, Dastardly and Muttley in Their Flying Machines.
The character was always scheming along with his sidekick, an anthropomorphic dog named Muttley. Dick Dastardly will have a major role in SCOOB! as the primary villain. He is voiced by Jason Isaacs.

Dee Dee Sykes was a member of the Teen Angels featured in the series about Captain Caveman. She and her two friends discovered Captain Caveman and brought him back to life. Dee Dee was portrayed as the most intelligent member of the group, much like Velma in the Scooby-Doo gang. Kiersey Clemons will be heard voicing the character in SCOOB!.

There certainly couldn’t be a Scooby-Doo film without the beloved talking dog in the front and center. The large Great Dane and loyal companion of Shaggy Rogers and the rest of Mystery Inc. made his Hanna-Barbera debut in 1969 with the premiere of Scooby-Doo, Where Are You! on CBS. In the following decades, several animated spinoffs were developed featuring Scooby, including movies.
Despite his cowardly demeanor, Scooby was useful in solving key mysterious alongside his human friends. He’s also well known for his various catchphrases like “Scooby-Dooby-Doo!” or “Ruh-roh!” when things go awry. Frank Welker has voiced the character since 2002 and will be playing him again in SCOOB! 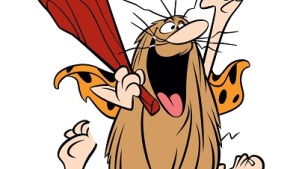 Dynomutt, the other half of the Daring Duo alongside Blue Falcon, is the robotic dog equipped with infinite gadgets to assist Radley. The dog’s superhero alias is Dog Wonder and his powers were known to come in handy while the Daring Duo protected their city. Like Scooby, Dynomutt was a sidekick that could talk. In SCOOB!, Dynomutt is voiced by Ken Jeong. 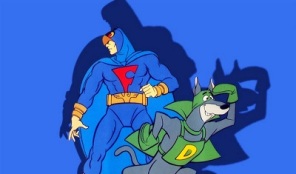 Blue Falcon was introduced in the 1976 animated series, Dynomutt, Dog Wonder, a series packaged with Scooby-Doo during Saturday morning cartoons. The character was a millionaire art dealer named Radley Crown who had a secret identity as a superhero.
His robotic dog, Dynomutt, served as his assistant and sidekick. Scooby, Shaggy, and the rest of the gang would often appear in the series and to assist in the Blue Falcon’s crimefighting and the same goes for the upcoming film. The character will be voiced by Mark Wahlberg in SCOOB!.

Velma Dinkley is the brains behind Mystery Incorporated. Since her introduction in 1969, Velma has always been the skeptic among the gang, not easily convinced by the supernatural. She also had a skill in convincing Scooby in finding courage through a bribe of Scooby Snacks.
Velma was voiced by Nicole Jaffe and Pat Stevens, among many others. Gina Rodriguez will be heard voicing Velma in SCOOB! while Ariana Greenblatt lends her voice to young Velma.

Daphne Blake, a.k.a. “Danger Prone Daphne,” is one of the two female members of the young detective gang. As suggested by her nickname, Daphne always had a history of getting herself stuck in dangerous situations until her portrayal was changed to make her more independent. Daphne came from a wealthy family who helped Mystery Inc. get off the ground.
The character, known for her fashion sense, was first voiced by Stefanianna Christopherson before Heather North took over. Sarah Michelle Gellar also portrayed Daphne in multiple titles. Amanda Seyfried is set to voice the character in SCOOB! with Mckenna Grace voicing young Daphne. 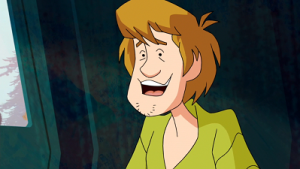 Shaggy, whose real name is Norville Rogers, is a member of Mystery Inc., an amateur group of detectives that focus on cases involving supernatural occurrences. Shaggy has been around for as long as Scooby in the Hanna-Barbera franchise, as the two are close companions. The character got his nickname for his shaggy style of hair and his loose-fitting attire.
Shaggy is somewhat of a slacker and shares the same type of cowardice as Scooby, but he helps get the job done. He was first voiced by Casey Kasem in the world of animation and notably portrayed by Matthew Lillard in the live-action adaptations from the early ’00s. Will Forte voices him in SCOOB! along with Iain Armitage as the younger version of Shaggy.

Fred Jones is a fellow member of Mystery Inc. and has a tendency to take the lead in investigations. As one of the Scooby-Doo Characters, he was always known for being the handsome member wearing his classic white sweater and orange ascot tie. Fred can a bit bossy at times, but it looks like SCOOB! is focusing more on his charm rather than his intelligence for the latest adaptation.
The character was voiced by Frank Welker since 1969, but live-action versions have been played by Freddie Prinze Jr. and Robbie Amell. For SCOOB!, Zac Efron will be heard voicing Fred with Pierce Gagnon playing his younger counterpart.
That has been the complete Scooby-Doo Characters you needed to know.