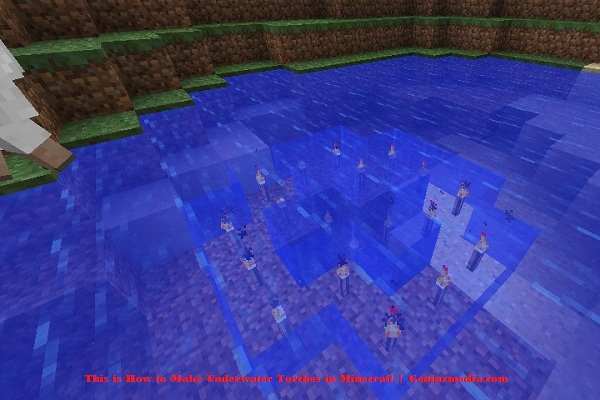 Well, you only need the combination of Magnesium, touch, and Carved Pumpkin to Make Underwater Torches in Minecraft. Welcome to another Minecraft tutorial, and today we will be guiding you on how to make underwater torches in Minecraft with just a few steps. This guide comes with a simple step solution as well as real-time pictures to help you out.

Minecraft game may be very popular around the world, most especially in the States with kids and adults playing the game…but not many are able to explore the game to catch all its remarkable features. Trust us, GeniuzMedia is always here to expose every hidden Minecraft tips for you all.

Underwater torches are crafted differently from other torches used in the game and perhaps comes with different recipes. The illumination power of underground torches has to be a lot higher than others in order for it to overcome water waves. In crafting it, you’d need a bit more powerful items to boast the illuminating power.

What is Underwater Torch in Minecraft and What Are They Used For?

Underwater torch just like the normal one is one of the craftable items in the game used for survival. It is created in Indev and offers the simplest support for dynamic lighting as well as the simplest placeable source of light in the game while traversing the ocean.

It uses is primarily for illumination, which allows players to make movement even at dark. However, Torches gives a light level of 14. Interestingly Torches also melt snow layers within 2 blocks and ice within 3 blocks which in turn creates more movement opportunity for a player.

This is How to Make Underwater Torches in Minecraft

When crafting Underwater torch in Minecraft, you only need the combination of Magnesium, touch, and Carved Pumpkin placed in your inventory. Combine three of the mentioned items and underwater torch is set for use. Meanwhile, let’s give you a step by step guide to get that done and perhaps the recipe needed;

While making this illuminating device, here are the recipes you need:

1x Magnesium: Magnesium is one of those elements available in the game Menu and can be obtained for use by simply navigating to the menu area.

1x Carved Pumpkin: Carved pumpkin is a carved version of a pumpkin that can be worn or used to spawn golems. It can be made by using shears on a pumpkin placed in the world.

1x Touch: Torches like we earlier mentioned are non-solid blocks that emit light for smooth movement.

How to Make Coloured Torches in Minecraft Education Edition

While the entire procedure may seem quite simple to scale through, here is a step-by-guide on how to get it done;

Now that you’ve already known the items to be used in making underwater torches, the next task is to collect them. This can be done easily by locating the Menu area…collect the needed items or quickly type the name of each item to avoid time-wasting.

Step 2: Move Items To Inventory For Use

Remember: All items collected should be 1x. Now move items to inventory. Simply use the key directions in moving items to the inventory. 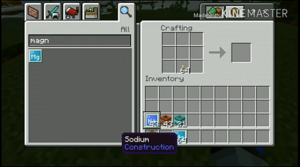 Step 3: Torch is Ready For Use

Congratulations, your item is ready for use. Go underwater with this device and illuminate dark corners with it.

Hope we’ve helped you get this done? Have any contribution? Feel free to go over our comment section and drop your views.

How to Make Coloured Torches in Minecraft Education Edition