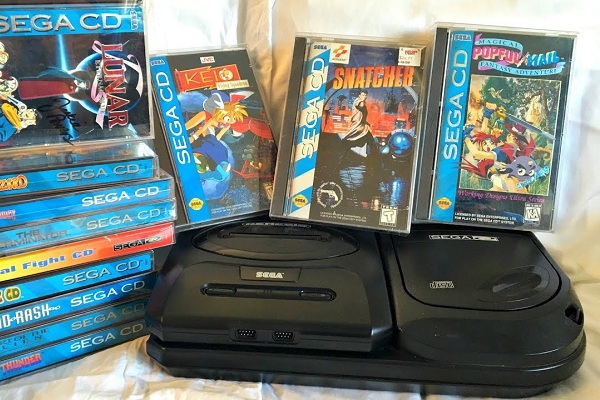 Today we will be taking a look at some of the best Sega CD games available. The Mega-CD was released as a fourth-generation game console by the Japanese owned  Sega; it was a hit in North America and Brazil. With the advantage of a higher storage capacity, which allowed a full-motion video (FMV). Sega partnered with JVC to design the Sega-CD, by march 1996 a total of 2.24 Million units of the Sega CD had been sold.

In this article, we will be looking at some of the best Sega-CD games, with over 200 CD games, it a tough job picking the best 20 from a huge library; here is our list of the top 20 Sega-CD games.

These Are The Top 20 Best Games for Sega CD Today; Top on our list is Sonic, released in 1993 for the Sega CD. The plot of the game follows an attempt by Sonic to save the planet from extraterrestrial invasion and its evil master Dr. Robotnic. Over 1.5 million units of the game were sold. This is best selling sega cd games till date. Released in 1992 for the Sega CD format: a story set in a future East Asian, where a human-robot is on a rampage killing humans and replacing them in the society. The player gets to become part of an agency set up to fight the “Snatcher”. Based on playability, Snatcher is included in the top sega cd games of all time. An open street fight game that sees the player up against some of the hard guys on the street, with great sounds and color scheme this game tops it all for an all-action, with new background and increase in numbers of enemies, you also have the option to have two players on simultaneously. A side-scrolling platform game that was released on CD in 1994, an unnamed fantasy world, the main character a female elf bounty hunter, whose main catch is the Nut Cracker, a real fun game. This game has a top ten mega cd games award and a game aggregator rating of 93%. A single-player role-playing Sega-CD game released in 1992, with high-quality audio and full-motion video. The game is centered on a young boy Alex, on a quest to become a hero like his idol Dyne; he begins a journey around the world to collects the necessary power to become the next Dragon Master. One of the best selling games on the Sega CD console, a First Person Shooter game, one of the first games on Sega Cd TO USE THE Full Motion Video for its gameplay. A scene set in a post-apocalyptic setting when humanity was forced to live underground. The player starts out as a rookie on the “sewer jockey” with the responsibility to destroy mutated creatures. With over 100,000 units sold, it was described as bizarre and wildly entertaining. An action-adventure game; a story of a dolphin that fights terrestrial threats to the world, a game is known for its high difficulty level. Originally released in 1992, but sequels followed in 1994, such as Ecco: The tide of time, Ecco jr, Ecco the Dolphin; The Defender of the Future. One of the Best Sega CD Games of all time? Honestly my favourite. A 1994 strategic role-playing game, with short cutscenes where the player is allowed to promote, and even resurrect fallen characters. A mixed review was given to this game but was praised for its gameplay and graphics. An original adaptation of the 1986 PC-version of the game, which was later converted to CD in 1993. Silpheed, the name of the spacecraft controlled by the player to save the earth from a powerful alien invasion. A vertical scrolling shooters game; five different weapon type is available for the player to acquire with each of them characterized by their own strength. A real intense shooters game that can leave your fingers red. A sequel adaptation of The Silver Star, originally released in 1994, with a more advanced us of the cutscenes, graphics, and extensive voice acting; critics say it has a better English translation and expansion of role-playing. Its scene set long after the death of the silver star, the player role; played by Lucia, begins its quest to stop Zophar from destroying the world. A game set in a Japan, between the era of 1865-1868; tales of a boy who was a keeper of a treasured key he knew little about, only to find out after it had been stolen at a mini-mart and sets on a journey to find it with his dragon spot, a fire shooting dragon. Released in 1993, a lot of gamers loved it for quality soundtracks.

12. Amazing Spiderman VS The Kingpin Well, it is your friendly neighbor Spiderman; set up on a quest to stop the kingpin by obtaining the key to disarming a nuclear bomb, a quest that sees his wife Mary Jane kidnapped by Venom, while he has to battle numerous enemies. Aside from scrolling games, a critically acclaimed game with the alternate ending if the player fails to safe the day. A post-apocalyptic setup which shows a driver on a quest to avenge the killing of his wife by a biker cult; his journey takes him through the nine levels, where he has to defeat the female boss to compete for his revenge mission. Released in 1994, critics say its interaction and graphic makes it a masterpiece. Initially released in Japan in 1993, before an English version released in 1993. The plot is based on Sengoku era feudal Japan, where a player takes control of mecha and fights a warlord who had defeated in before in a bid to conquer the world. The music and cutscene elevate the game but most gamers say there are better alternatives like MUSHA and spriggan. A 1992 shooters game that allows players to shoot a photo representation of the enemies. A police officer controlled by the player is called upon by the police department n a bid to stop an invasion by an organized crime gang; A simplistic gameplay and nice graphic. Gameplay that requires the player to acquire all SECURITY CODES of a building in other to unlock a murder mystery and protect the tenant by using a surveillance camera, intruders are traped by flipping switches. Gamers rate this game a 6 out of 10, saying it is like Night Trap but a little more involving. Unarguably one of the Best Sega CD Games of all time.

17. The Adventures Of Batman & Robbin Released between 1994 & 1995, an action-adventure that sees Batman takes the stage and faces one villain on each stage. With animated cutscene for each stage sometimes referred to as “The Lost Episodes”. Critics love the game for its brain-teasing challenge but most say Robbin only appears in the cutscenes not playing any major role in the actual game. “A game flushed with realism, excitement, and credibility” Computer Gaming World a game critic in 1993 stated about the NHL Hockey. A game knows for its vertical angled camera with 2D character models, with four different modes; exhibition, playoffs, and best of seven playoffs: with costume song for the intro and when a goal is scored. Horizontal-scrolling gameplay that allows players to take control of starship, and battle a supercomputer from taking over the earth, shooting down enemies and avoid projectiles. Some critics love it for it fast and intense gameplay while most say it lacked originality and stands low on ranking with other shoot- em games. May be last on our list, but Prize Fighter is obviously one of the Best Sega CD Games you can play. A boxing game released in 1993, with its gameplay coming up in black and white, most critics gave it a 6.2 out of 10 saying the game fares very well except for its black and white footage. It took five weeks for the choreographing of the fighters before it was filmed. Shawn sackenheim says it a very challenging game where you have to pick one or two fighting styles.