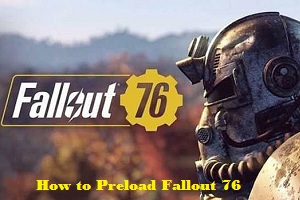 The game development group known as Bethesda group revealed that you can Preload Fallout 76 Beta. A lot of gamers though have been worried sick about the file size of the game. In the course of this article, we would be looking at a practical guide on how you can preload Fallout 76.

When Can you Preload Fallout 76 Beta?

Preloading the Fallout 76 Beta would start from 7 pm Eastern Time on the 19th of October. Bethesda previously made a statement that the game would not have a preload, but its 2018 statement on Twitter refuted those claims. Also, the developers said that ps4 or pc gamers can be able to pre-install the game.

Be prepared! The #Fallout76 B.E.T.A. is now available to pre-load on @Xbox One. Download it today to be ready for the first session planned for October 23 from 7pm ET to 11pm ET.

Practical Guide on How To Preload Fallout 76

as for PS4 players, the process is very much similar. As stated before first pre-order the game, then when the preload of the Fallout 76 is available, you would search for it and download it.

coming to PC users, the process is entirely different.  on your PC you will need to first download the Bethesda launcher. It is important to note that the launcher is a free program, so you don’t need to worry about any costs. on your PC,  you would need to pre-order the game from the launcher to be able to access the fallout 76 Beta.

Interesting Facts About the Fallout 76 Game 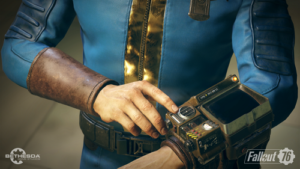 In this game, you will find the North mountain lookout tower on the northern end of the Savage divide. One interesting thing that you will notice as you approach is the pile of furniture that is lying at the bottom.

When you reach the top it looks like someone had a wild Halloween party. There are lots of decorations including a nifty skeleton costume. Also worth noting, is there a few faxes scattered across the table that informs Rangers who guard the tower.

The Fallout 76 video game is laden with cryptids also known as mythical creatures that are based on real-life folklore. Among these most interesting creatures is the Mothman, which is a very big man-sized moth. In the Fallout 76 game, you would meet different variations of this guy. All the same, the best way to see him is to complete the event at land view Lighthouse.

After you must have squashed some fireflies and lit the beacon, you will be treated to a visit from a Mothman.  This visit is friendly, and at the end of the visit, you would receive a 5% experience bonus.

Another interesting fact about the Fallout 76 game is the confession time.  you would notice that if you go across the river in Flatwoods,  you will come across a small camp that is set up with a Lady who is sitting near a long burnt-out fire. You will also notice that there are little bits of Loot scattered around. Some of these loots include a first aid box, water, and Chems.

When you loot the woman a holotape will be revealed. Also listening to her story will bum you out a bit. She tells a sad story that weaves a tale of chem addiction and love gone wrong. 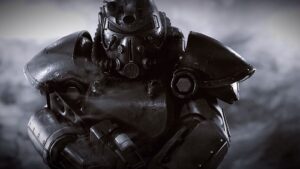 In the Flatwoods, the game needs to take at least a minute to go around and open all of the refrigerator doors that are on the ground level. The player will find out that there is a particularly unfortunate responder.  When you dig through his belongings to find a holotape you will see recordings of his final desperate moments.  These recordings will reveal the location of his life savings.

See How To Run Fallout 3 On Windows 10

Well? Go on, it’s not like he’ll be needing them any longer.

According to the exact instructions which he provides, you will find a lockbox that is launched into a particular tree stump. What you will see there in the lockbox are some caps, ammunition, and a new gun.

When you sit near the crossroads that are between the Kanawha Nika-cola plant, you would find a small house that is unmarked. Inside the house, there are so many weird things that you would find. The main thing that you will discover, is a well-dressed radroach that is seating on the porcelain throne.

He also has a nice heart and a stylish walking cane. Not forgetting, there is an expensive wedding band too.