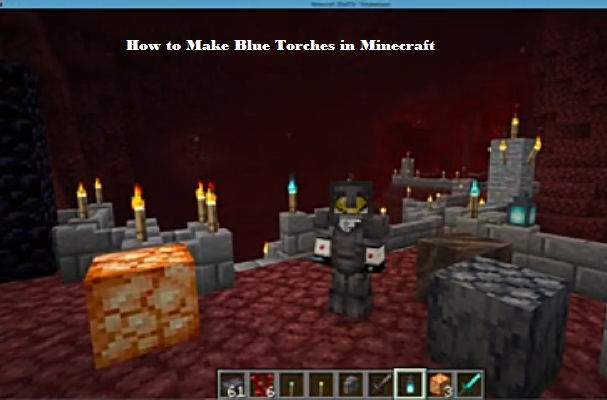 In the game of minecraft there are numerous features always open to be explored, but how do you ever get to find them out? Well, today we will be showing you how to how to make blue torches in minecraft with very simple steps. This covers users of PC, PS and Xbox with different game versions.

What Are Torches? And What Are They Used For in Minecraft?

Torches in general are used for illumination in the game. It allows players traverse land and ocean with clear view even at the darkest period. Torches also help in melting ice in temperate areas, thereby allowing more freedom of movement in the game. Meanwhile, blue torches may not be as powerful to the point of melting ice. They also require different recipes when crafting them as compared to normal torch. This is How to Make Blue Torches in Minecraft

To make blue torches in minecraft you need Soul Soil which can be found in Soul Soil Valley. New in Minecraft 1.16 Nether Update is Soul Soil found in Soul Soil Valley which will burn blue when on fire. When used to make a torch you get a blue Soul Fire Torch and that can be made into a blue Soul Fire Lantern. Meanwhile, we will be showing you all the recipes you need to how to make a blue torch in minecraft as well as a step by step guide to have it done.

Meanwhile, To create a blue torch, we’re going to need to venture into the Nether and gather up some soul soil and sticks like we had earlier mentioned. Below are the recipes and various steps you’d need to follow.

Charcoal or Coal – Coal can be fund in your Nether and charcoal can be crafted by cutting trees down and burning them, if you don’t already have them available.

Like in our third paragraph, you will need to visit the nether which generally requires you to harvest obsidian, make a 4×5 rectangle and light it with a Flint and Steel. Head to the purple portal and you will find yourself in the Nether.

Soul Soil can be found in Soul Soil Valley. It is new in Minecraft 1.16 Nether Update and Soul Soil is  found in Soul Soil Valley which will burn blue when on fire. Soul Soil has a similar color, but is wavy and doesn’t slow you down. You’ll know you are in the right place if you see some blue flames coming off the soil. Meanwhile, when you walk closer, it may in some cases change to red. Harvest some of the Soul Soil. Now that you have the Soul Soil, you’ll just need to gather a stick, Charcoal or coal. Put the materials into your Crafting Table and you will get 4x blue Torches for each batch of ingredients you insert. So, for every beginer who’s been asking “how do you make blue torches in minecraft”? We hope you have learned that today. Our comment box is always open for suggestions and new ideas from gaming pros, so feel free to stop by.