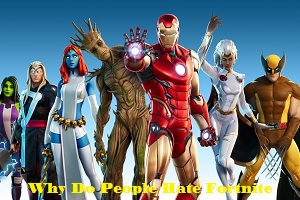 All the same, the Fortnite video game is very popular, yet a lot of gamers hate it for just no reason. Some dislike the game because of its existence, while some don’t like it because of the actions taken by the game developers. So, why do people hate Fortnite? Without further mouthing, let us delve in.

1. The Game Developers Don’t Listen to Their Gaming Community

As they are a big gaming brand, Fortnite has a lot of problems. First off, some of the patch notes of the game have gone missing, and the community is hopeful that the data miners can come up with details of a finer update.

Most Fortnite fans have complained that the Epic games (Fortnite game developers), do not listen to the gaming community. Although the truth is that; most of the changes that the fans are asking for, cannot be done overnight. These edits that fans also want to take effect can also take a lot of time.

Although, there are people who throw these shades against the Fortnite game so that they can gain social media traction. Most people believe that if they comment negatively about a game, that the Fortnite fandom would pay attention to what they have to say.

2. The Fortnite Video Game has a Toxic Gaming Community

3. Fortnite Game Developers are Very Strict with their Developer Guidelines.

Here is another Reason Why People Hate Fortnite. The Fortnite game developers have put in place a lot of rules and regulations that would make the game have disciplinary standards. Well, some members of the Fortnite fandom believe that these strict guidelines that are highly punishable take the fun off the books. Here are some of the hardcore rules that the Epic games stipulate:

4. They Have Zero Tolerance for Underage Gambling in the Game

A lot of Fortnite players are very popular. Well, there are both negative and positive reasons why these players are popular.  Some years ago, the Epic games went on to ban some players due to indulgence in underage gambling with the game.

The gaming community were just not happy with this outcome, but drew up a lot of hate for the game. Some of the Fortnite fandom are of the belief that the ban and restriction to underage gambling took the fun out of the game.

5. The Gaming Community of Fortnite is filled with a Younger Generation of Players that Don’t get the Picture

Here is another Reason Why People Hate Fortnite. At some point in the fandom, enough is enough. Most people are of the belief that the reason the Epic games get away with some things is because the fandom consists mostly of little kids that don’t get the whole picture. This is also why most big streamers left the Fortnite game.

6. They Have Lots of Crash and Technical issues

Here is the main reason Why Fortnite is Dying in my opinion. The Fortnite game is laden with a lot of crash issues, as is evident with a load of complaints tabled in their game communities.  Although the board tries hard to solve issues related to the battle Royale, creative, and save the world, more problems keep popping up.

The only thing Epic games, do is to release a patch for gamers to download and fix in-game issues.

7. The Game is no Longer Popular as it used to be

A lot of people like to join a moving train. That is, they like to flow with trends. Most gamers have started to show hate in the game because it is no longer as popular as it used to be.

Some make assertions like “Fortnite is dying”, and so on. If you take a dip into the Google Trends tool, you would notice that the game has shown a decline in searches for the past 5 years. It continued to maintain its decrease in the black hole event since then.

8. The Fortnite Game was Removed from Apple Store

Apple terminated the Fortnite game from their app store because of disagreements in in-App payments. This was because Fortnite offered a discount on its virtual currency for making game purchases outside the Fortnite app.  Here, apple receives a 30% from any in-game purchase that is made.

According to the game developers, they opined that the fee was outrageous. So they went on to sue apple for taking down the video game app. Well, according to statistia, there are over 345 million people that use Apple smartphone across Europe and America. And with the game no longer available in the app store, it is drawing a lot of hate to itself.

9. Players are not happy with the Season 2 map

Even gamers that have a diehard love for the game took to social media to share their discontent about how things have not been the same since the black hole event. But with the introduction of season 2, the fans have not received the game well as expected. There has been a new map that has been in use for some time now, but Fortnite players are unhappy with it. Some even took to Twitter to show their discontent.

The problem with Fortnite (and games that use similar models) is that they end up reinforcing weird understandings of what money, time, and value really mean. As a parent, I have seen firsthand what it does to a kid. I think Fortnite was close to being a great game. They just have to stop programming their users.

This isn’t limited to Fortnite, either. There are so many companies that try to program their users in order to make money. Anything to make the users perform some action. Advertising. That is wrong and we need to stop doing it. We need to ask users what they want. Then we can tailor the experience to the user instead of the other way around. Be humane in your development.