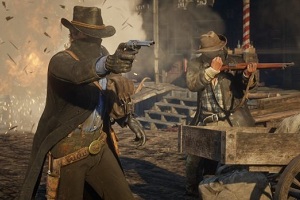 Any gamer that has spent ample time with the Red Dead Redemption 2 game online must have come across characters that use so many weapons. Amongst these wide varieties of guns is the Dual Wielding pistol.

One of the best ways to get a closeup of weapons in the Read Dead Redemption is by Death by griefing. It is important to note that to equip a game character with two revolvers is not as simple as it seems. In the Red Dead Redemption 2 campaign, game players would need to naturally earn the ability to possess dual pistols. Here, they would have to seek out and purchase an item that is known as an off-hand Holster. 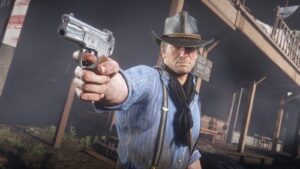 This would give the players the ability to store an additional revolver by their side and use it at will.

To be able to wield the Dual Pistols in the Red Redemption game, the player would need to reach Level 25 in the online game. We would cover how to level up to acquire the dual pistols in subsequent paragraphs.

The best dual pistols in the Red Redemption 2 game are the “Off-Hand Holsters”. Off-Hand Holsters in the Red Redemption 2 game can be found in the gunsmith in certain cities in the game. Some of the cities include; Tumbleweed, valentine, Denis, Rhodes, Saint-Denis, and Annenberg. The game developers made it easy for players to locate it on the map with a pistol icon.

Up next, cowpokes would approach the counter, open a catalog, go over to the “accessories section” and browse for dual pistol. Players can purchase an Off-hand holster here for $7.75. They can also buy the horsemanship holster for $8.50.

The economy of the Red Redemption online game is not stable as the prices are likely to fluctuate as changes are made to how gamers can acquire weapons and spend their in-game money. A Red Redemption player can trade in some pelts and get some cash that can be used to make an in-game buy.

How to Level Up Quickly in the Red Redemption

This is how you can level up quickly in Rockstar games Red Dead Redemption 2.

Just like the Grand theft auto 5 progression system, players can earn XP for some missions and some activities in open-world game settings.

The as it is done in the GTA online, the XP earns players ranks that would be put together with the in-game currency to buy cool weapons for advantageous gameplay.

In the Red Dead Redemption 2 online, there is no need for all this repetitive gameplay. The best way to reach level 25 in the Red Dead game is to play through all the available story missions. There are missions that do not need players to fight each other in open combat. It is also important to note that in the light of the previously stated notion, they easily offer the most XP in the entire game mode.

The moment a player has completed a mission, they can still get into matchmaking and repeat missions in Red Dead Redemption for more XP. In light of this, it is important to note that you would only receive monetary awards for completing missions once.

If the video game is not what you really thought it would be, there are some unique challenges that are available for you. These challenges would provide you with a lot of XP that you would use for leveling in the game.

One of the best things about this gaming approach is that there are lots of challenges that are available for any playing style. Some of the playing styles to indulge in this approach are; hunting, skinning animals or killing enemies and players with some kind of weapons. A player would be able to perform these game styles a certain number of times to complete a particular challenge.

If these options do not interest you, or you want to take a break from the less difficult approach for leveling, there are more competitive ways like hostile territory, Shootout, or the Battle Royale of Red dead Online.

You can make it count in the Red Dead Battle royale, where there are 32 players all fighting against each other using knives, arrows, or bows. Anyways, the game offers more than just XP and can also be a fun indulgence for players that are most interested in multiplayer modes.

It is important to note that playing with friends can up your chances of leveling in the game.